Glens Falls Symphony – A Celebration of the Voice 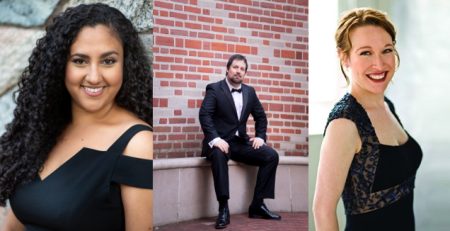 In light of the changing Covid-19 circumstances, the Symphony and/or the concert venues may be revised to limited seating capacity, change admission policies, or even postponement or cancellation. We will keep you informed of any changes if they occur. Thank you for understanding!
—–

Johannes Brahms
Serenade in D Major, Op. 11
Samuel Barber
Knoxville Summer 1915
For voice and Orchestra
Soprano Ava Pine
Léo Delibes
Flower Duet from the opera Lakmé
Soprano Ava Pine
Mezzo-Soprano Zaray D. Rossi
—–
Join the Glens Falls Symphony for a special collaboration with the Seagle Festival and Skidmore Teaching Professor Evan Mack for selections from Mr. Mack’s opera, “Lucinda y las flores de la Nochebuena”. Selections from this touching work will be joined with Barber’s evocative reflection from a porch on a summer evening, “Knoxville: Summer of 1915” by Samuel Barber, sung by soprano Ava Pine. Johannes Brahms wrote the Serenade Op. 11 as a compositional study exercise before tackling a full symphony, and we present three movements of this lovely work. Then the ears will relax into the uncommon beauty of the famous “Flower Duet” from Lakme, by Delibes.
—–
About Evan Mack
Believing that opera should be theater grounded in climatic expression that delivers larger-than-life stories and music that harnesses the full athletic thrill of singing, Evan Mack has devoted much of his compositional life to opera and song. His first major operatic composition, where he served as both composer and librettist, was Angel of the Amazon. “Angel” premiered in May of 2011 by Encompass New Opera Theatre at the Baryshnikov Arts Center in New York City and was subsequently released on CD worldwide by Albany Records. Two years later, Fresno State Opera Theater premiered The Secret of Luca. This was the first of several collaborations with librettist Joshua McGuire. In August 2016, their American grand opera Roscoe premiered at Seagle Music Colony to rave reviews. Roscoe received its orchestral world premiere with the Albany Symphony starring Metropolitan Opera star Deborah Voigt. In between the two large scale projects, Mack & McGuire found time to write the first ever opera for Twitter #IsOperaDead – an opera in 5 acts lasting one minute and forty seconds.
–
Their multi-cultural Christmas opera for children, Lucinda y las Flores de la Nochebuena is quickly becoming a holiday standard with yearly productions by San Francisco Opera, Opera in the Heights and Fresno State Opera who commissioned the opera. The one-act opera The Ghosts of Gatsby premiered by Samford Opera in Birmingham, AL in 2019 and won the National Opera Association’s Argento Chamber Opera Competition. Mack & McGuire’s latest, Yeltsin in Texas! will get a world premiere in 2020 by TCU and Opera in the Heights.
–
Evan Mack has proven as deft at song writing as he is in opera. His song A Little More Perfect is a setting of Justice Anthony Kennedy’s final paragraph of the Marriage Equality Decision by the Supreme Court in 2015. Premiering at Seagle Music Colony in 2015, it has quickly become a favorite of many baritones including Michael Mayes, Daniel Okulich and Michael Miller to name a few. The song had its professional premiere at the Glimmerglass Festival in 2016 and the orchestral premiere at the Fort Worth Opera Festival in 2017. His new cycle If Only Lenny Were Here, which celebrates the life of Leonard Bernstein had its world premiere with the Schenectady Symphony in October of 2018.
–
Evan was named “2018 Professional of the Year” by Musical America, was a composing fellow at the John Duffy Composers Institute and a resident artist at Yaddo. He is currently published with Hal Leonard, Alfred, and Amazon. Evan is a Teaching Professor at Skidmore College. He lives in Ticonderoga with his wife, Kristin and two sons, Carter and Henry.