Shakespeare at the Park Dinner Theater 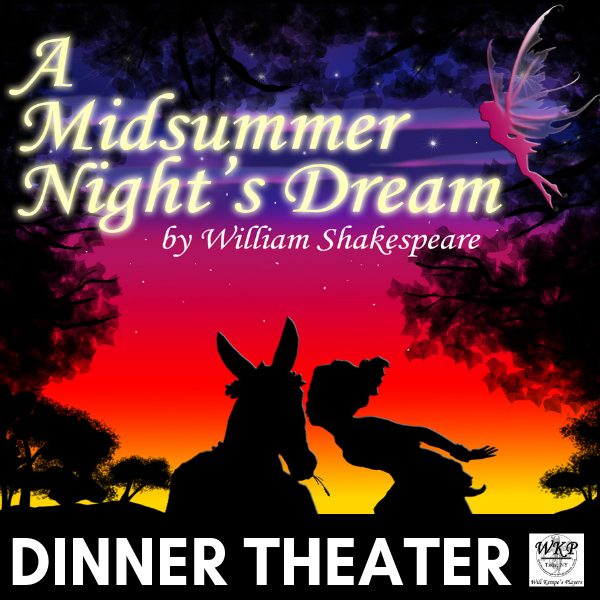 The Park Presents Will Kempe’s Players in a midsummer dinner theater presentation of Shakespeare’s iconic comedy presented in the traditional method and accompanied by a luscious multi-course buffet by Doc’s Restaurant.

Summer, summer, summary…
William Shakespeare’s A Midsummer Night’s Dream is an early modern exploration of mythological storytelling. This fantastical comedy blends the dis/merits of faerie magick and the reveries of human civilization as it follows the wedding day of buskin’d Amazonian Queen, Titania, and her husband-to-be, Theseus, the founder-hero of Athens, during the spring rites of May. The preparations for their auspicious day is interrupted by a complaint from Egeus, prominent noble of Athens, that his daughter, Hermia, will not follow her father’s plans to have her betrothed to Demetrius, son of noble Nedar. Instead her love is bequeathed to Lysander, a man of equal standing, and under pain of death (as per the custom of Athenian law) or chastity (as proposed by Theseus) they choose to run away into the woods, leaving Hermia’s childhood friend Helena to follow them in her own pursuits of love and favor in the eyes of these men.
Meanwhile, a band of rude mechanicals – laborers of Athens who work for bread, led by Peter Quince and bully Bottom – prepare a retelling of the comical tragedy Pyramus and Thisbe in earnest of Theseus’ and Hippolyta’s wedding day, which they rehearse within the same woods. The humans have encroached upon the faeries who inhabit these woods, most specifically the presently quibbling Summer King and Queen of the Seelie Court, Oberon and Titania. Oberon is begging her of a miraculously-born changeling boy, a shapeshifter who may provide him immense power – all to the chagrin of one mischeciously odious hobgoblin they call Puck.
Through mismatched potions, love-blind hijinx, faerie songs, and lots of earnest wandering through the dark forest under the new moon (check the almanac), all aligns in Theseus’ court to celebrate the pageant marriage of lords and ladies, yes, but also the union of the magickal, natural world and that of the world of man.
One of Shakespeare’s earlier plays, A Midsummer Night’s Dream has all the trappings of early modern Elizabethan theatre replete with singing, dancing, combat, mysticism, history, and of course – some of the most beautiful storytelling ever written.