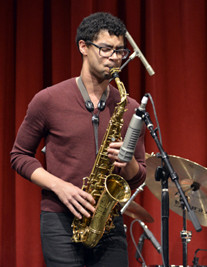 Adam Siegel is an alto saxophonist who regularly performs and records throughout the Hudson Valley and New York. With years of performance experience, Siegel has shared the stage with such greats as Joe Magnarelli, Tani Tabbal, Michael Bisio, and more. Tony Dudley-Evans of London Jazz News writes of a recent album release by Tani Tabbal: “Adam Siegel is a real discovery; he has a strong tone on the alto and the ability to interact very effectively with his colleagues.” Jan Granlie – editor-in-chief of the publication Salt Peanuts and formerly of Jazznytt – writes: “Adam Siegel … is an excellent technician, and his creativity is certainly on par with [Henry] Threadgill. … there are many younger alto saxophonists who can learn a lot from the way he plays.”